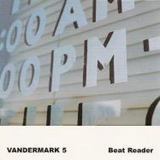 Beat Reader is the tenth studio album of all-original material from Chicago's esteemed Vandermark 5. Leading his most resilient and diverse ensemble into its second decade, composer/multi-instrumentalist Ken Vandermark has accomplished a remarkable achievement in a time when regular touring line-ups have vanished.

Since their debut recording, Single Piece Flow (Atavistic, 1997), Vandermark's flagship ensemble has been constantly evolving and growing, resulting in a number of personnel changes over the years. A Discontinuous Line (Atavistic, 2006) introduced the quintet's newest member, cellist Fred Lonberg-Holm. A diverse stylist, his contributions range from the subtle chamber music inflections of the delicate "Further From The Truth" to the raucous, electrified skronk at the heart of the hard-bop inspired "Speedplay."

Lonberg-Holm's predilection for double-stops and electronic EFX lends an acidic, rock-tinged edge to the band that it's lacked since former trombonist/guitarist Jeb Bishop retired his electric guitar on 2001's aptly titled Acoustic Machine (Atavistic). Soloing with maniacal intensity, "New Acrylic" and "Desireless" reveal the dizzying, kaleidoscopic sound worlds a virtuoso cellist with a distortion pedal and a wah-wah can conjure.

Vandermark has dropped the tenor saxophone from his arsenal in this line-up, settling on baritone and an assortment of clarinets, and leaving saxophonist Dave Rempis to handle the middle range. Together they span an array of moods, from the bluesy bitter-sweetness of "Any Given Number" to the biting, circuitous commentary of "Compass Shatters Magnet."

The stalwart rhythm section of drummer Tim Daisy and bassist Kent Kessler provides an elastic foundation. "Compass Shatters Magnet" demonstrates their encyclopedic range, gradually ascending from crisp pointillist accents and pastel washes to a pungent R&B groove full of primal, funky back beats. Swinging with high-wire verve, they launch "Friction" and "Desireless" into the stratosphere, while "Further From The Truth" features the pair's nuanced rubato finesse.

As is his custom, Vandermark dedicates each tune to a fellow artist, from drummer Max Roach to photographer Walker Evans. His limitless range of interests illuminates his inclusive approach, lending credence to his stylistic diversity. Challenging, inventive and immensely enjoyable, Beat Reader finds Vandermark's enduring ensemble entering its second decade with as much vigor as they did on their debut.

Friction (for Gyorgy Ligeti); New Acrylic (for Andreas Gursky); Any Given Number (for Bernd and Hilla Becher); Signposts (for Lee Friedlander); Speedplay (for Max Roach); Compass Shatters Magnet (for Paul Rutherford); Further From The Truth (for Walker Evans); Desireless (for Daido Moriyama).