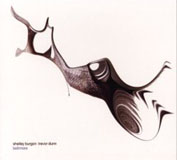 In the pursuit of improvised music, any instrumentation, no matter how unorthodox, is valid, as long as the musicians have the appropriate experimental attitude and chops to back it up. Bassist Trevor Dunn and pedal harpist Shelley Burgon discovered that an expansive vocabulary and reservoir of ideas can make possible a taut, dynamic musical dialogue, even though harp is not normally considered an improvising instrument. In 2005 they went on a two-week DIY tour, performing concerts wherever possible; the final show is captured on Baltimore, a raw six-part improvisation.

With wood and strings as the basic elements, Dunn and Burgon conjure sounds and textures that defy expectations for their instruments. Dunn wields his bow to elicit a shrill wail for dramatic effect on "I. On "III, his arco achieves a delicate whistle. Dunn extends the sonic possibilities with percussive raps on the instrument's body and strings for declarative punctuation. Burgon also evinces a percussive approach, at times plonking the strings and tamping their sustain to accentuate the attack. She eschews stereotypical chorus-of-angels glissandos, except for a brief crescendo in the finale. Instead, she uses an earthier style, scraping the strings and excavating buzzes that approximate the sounds of prepared piano.

The improvisations decisively unfold with little hesitation: ideas are shared and developed. Applying a composer's mindset, Dunn and Burgon imbue tension that is resolved over time, providing an oblique arc to the concert. Even without developed melodic movements, the improvisations sound logical. The two remain tethered, abstractly at times and play with—not against—each other. Spaces are left for notes and phrases to breathe rather than being crushed in a barrage. Baltimore reveals two improvisers who are attuned to the novel possibilities of their uncommon instrumentation and revel in the exploration.