BY VICTOR VERNEY
October 7, 2006
Sign in to view read count 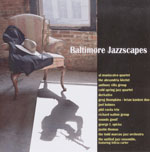 Asked to name America's jazz hotbeds, most fans would mention New York, New Orleans, and perhaps Boston or Philadelphia. Midwesterners might insist on Chicago and Kansas City, while Left Coasters could be expected to lobby for LA and San Francisco. If this CD is any indication, Baltimoreans may be said to have a strong case for their inclusion on the list.

Coordinated by the Baltimore Jazz Alliance, a not-for-profit organization committed to the development of the jazz community and audience, this CD is a well-chosen, well-presented compilation of that city's leading jazz lights. With fourteen tracks, space does not permit much more than a brief gloss on the individual performers, which is a shame; it's strong from start to finish, making it difficult to single out any particular track for special mention.

Piano aficionados will find things to like here. The driving "Holyspirit," a powerful excursion into the McCoy Tyner school by Joel Holmes, also has an excellent drum solo by Eric Kennedy. "AHAMAY" is a tasteful keyboard performance by George Spicka in a Bob James vein. In addition to fronting the Phil Ravita Trio on this track (with a solo by bassist Ravita), Spicka also contributes a solo effort on an original composition, "Them Gals."

The song selection is nicely balanced, covering the old as well as the new. It includes two standards showcasing polished male and female vocalists—Ron McCadden on "You'd Be So Nice To Come Home To" and Felicia Carter on "Makin' Whoopee." Another chestnut, "Have You Met Miss Jones?," is a relaxed acoustic duet by saxophonist Greg Thompkins and guitarist Brian Kooken (sounding a bit like Joe Pass here).

On "Where There's a Will, There's a Waltz," the Alexandria Kleztet features the violin/clarinet front line of Seth Kibel and Helen Hausmann, respectively—somewhat unusual in jazz combos, if not in klezmer bands—that makes for a charming whimsicality.

"Rio Le" has all the right ingredients for a south-of-the-border number with radio airplay potential: the flamenco-esque guitar of Richard Walton, the lilting flute of Joe Doyle, and the obligatory Latin percussion of John Grant. "Milestones" is a one-man tour de force by Justin Thomas, who simply plays the hell out of the vibraphone, accompanying himself with overdubbed electronic instruments in a very interesting arrangement.

"Pompeii," by the Todd Marcus Jazz Orchestra, is as fiery as its name would lead one to expect. The band features a six-man front line of horns, including Marcus on bass clarinet along with tenor, alto, flute, trumpet and trombone. Both the sound and the song recall the work of Charles Mingus.

While Baltimore's once-proud Orioles have fallen on hard times lately, prompting some to attend games with bags over their heads, at least that city's residents can take justifiable pride in the local musicians. This CD is highly recommended for them—or anyone else, anywhere else—who appreciates high-quality jazz.

Al's the Things You Are; Where There's a Will, There's a Waltz; Words Unspoken; Imagine That; Abesroof; Have You Met Miss Jones?; Holyspirit; AHAMAY; Rio Le; You'd Be So Nice To Come Home To; Them Gals; Milestones; Pompeii; Makin' Whoopee.