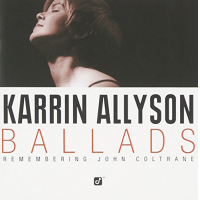 I am listening to The John Coltrane Quartet's Ballads as I write this piece. I have never considered Coltrane a player of "pretty music." Where Charlie Parker was "just looking for the pretty notes" during his frenetic creative spurts, Coltrane was just planning to look for a place for all notes, presented in just the right order and at the right tempo. Coltrane's solo on Miles Davis' "'Round Midnight" on 'Round about Midnight is a perfect example of what would become the tenorist's "wall of sound."

I do not find John Coltrane's playing on Ballads pretty. It is his genius clarified through the cheesecloth of standards that makes this recording so timeless. His Impulse! recording with Johnny Hartman ( John Coltrane and Johnny Hartman, Impulse! 157, 1963) is the same way, but this time with a melding of voice and saxophone, somehow softening Coltrane's thorny exterior. Karrin Allyson takes this a step further with her new release, Ballads: Remembering John Coltrane.

With a voice and facility equal to any singer presently singing, Ms. Allyson infuses this special collection of standards with a pure beauty without sacrificing the Coltrane vision. Using the same arrangements as the Coltrane Quartet and for the most part following his playing, Ballads: Remembering John Coltrane offers the listener an idea of what Coltrane was thinking when blowing these ballads out of the bell of his horn. "Say It" is breathtaking as is "Too Young to Go Steady" and "All, or Nothing at All." Fellow saxists Bob Berg, Steve Wilson, and James Carter make no attempt to emulate the master, only to express happiness in playing the same music he once did. James Williams and John Patitucci are most tasteful in their support.

Say It (Over And Over Again), You Don