By Norman Weinstein
September 21, 2005
Sign in to view read count 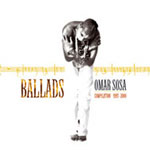 Perhaps this is the finest CD saddled with a concept I dislike that I've heard in years. Strange category? Yes, here we find one of the supreme Cuban jazz pianists of our era with a career retrospective of only ballads. It is one matter to provide a "John Coltrane for Lovers compilation—in fact there are two currently on the market—because Coltrane's oeuvre outside of ballads has long been available.

But Omar Sosa is not yet a force in the jazz bins on that level, and here we get a ballad reduction from four previous albums that were not exactly widely distributed. This means that if you're hearing Sosa for the first time on Ballads, you can't even guess how deeply percussive his attack is, and how married his improvisations are with the traditional rhythms of Afro-Cuban music. You might think on the basis of this CD that Sosa is Cuba's answer to Bill Evans.

And that is far from the truth. Sosa was classically trained, and you can hear the Evans influence through recastings of Chopin and Debussy. There's a lot of sturdy French romanticism in his ten original compositions in this collection, not surprising since Spanish and Cuban composers have long found fertile ground in that musical vein. Lots of dreamy pastel harmonies, great washes of minor mode colors, as if a musical Monet visited Havana before returning to the colors of his home garden. There's some sumptuous playing throughout, particularly when Sosa gets into a musical conversation with the dry-as-fine-wine tenor sax of Sheldon Brown. But this represents only one level of Sosa's art.

What you completely miss on this "Sosa for Lovers release is the sheer bracing bravado of the Santeria rhythms mixed and matched with Middle Eastern melodies and a sprinkling of electronica that can be found on his flawless recent release, Mulatos. He's a high-energy player with a sentimental streak that ballads give him plenty of room to toy with.

The most exciting ballads on this disc find him backed by tablas, those drums from India that can sometimes be mistaken on recordings for Cuban bata drums. Sosa thrives in an atmosphere of odd time signatures articulated by wily drummers. If he needed a concept album, a better concept would have been to borrow one from Art Blakey, something like "Sosa Does Rhythms of Two Continents or "Sosa's Greatest Beats.

In the meantime, be grateful for the lovely and lush music here, but be sure to check out Mulatos immediately—if you haven't already—in order to get a more multidimensional image of a major pianist who is still maturing.