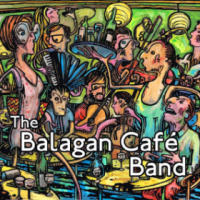 The Balagan Café Band is a London-based trio—guitarist Christian Miller, violinist Richard Jones and cellist Shirley Smart—whose sound encompasses traditional tunes, jazz standards, medieval romance and music for the lute. On this, the band's debut release, the core trio and guests take those influences and create an impressively diverse and enjoyable collection of tunes, played with skill and flair.

"Balagan" is Hebrew for "a big mess," but forget any negative connotations of that definition: the Balagan Café Band might chuck in a lot of ingredients, but the result is cohesive and beautifully structured. Miller calls it organised chaos, but the compositions on display suggest more organisation than chaos (at least in the takes presented here). Geographically, influences range from the Chaabi music of Algeria and Morocco to Brazil, Bulgaria and the Balkans. Those influences stretch back over six or seven centuries.

Vocalist Alice Zawadzki appears on the album's two oldest pieces—John Dowland's "Flow My Tears," written around 1600, and "Douce Dame Jolie" by the fourteenth-century French composer Guillaume de Machaut. Zawadzki's affecting vocals combine with the trio's sympathetic instrumental backing to gorgeous effect on these romantic yet melancholy songs. Lest the listener gets too lachrymose, the songs are separated by Miller's irresistibly jolly Manouche-style "Stompin' At The Aljani"—a tune that is much more typical of the album's upbeat, cheerful, vibe.

Smart's "Mobius Blues," named after the famous strip, features a rare example of electronic effects (on the violin) and a rhythm full of sudden shifts and twists. Miller's "Malia" also plays with rhythm—adding and removing notes in the repeated melody line gives a phased effect (inspired by Steve Reich) while Joe Browne's soprano sax brings a new voice to the line-up. The one bona-fide jazz standard, "Honeysuckle Rose," starts in free-form style, slowly revealing snippets of the well-worn melody until the tune emerges from Jones's violin for a few brief seconds before the freer approach regains control and the band end proceedings with a chuckle or two.