By C. MICHAEL BAILEY
November 20, 2016
Sign in to view read count
A Cappella is the original format for choral singing. The five selections addressed here make 2016 one of the better years for this music. 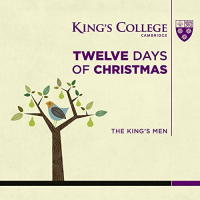 The King's Men are a vocal ensemble made up of choral scholars attending King's College, Cambridge. They are considered a "close-harmony" group. Close harmony is an arrangement of the notes of chords within a narrow range, usually notes that are no more than an octave apart. The King's Men eschew separate recording of the requisite parts to record together as a group allowing for a more integrated and natural performance. This is readily borne out on this present collection of holiday chestnuts. The performances of "Gabriel's Message," "The Christmas Song," and "Away in a Manger" are all tightly scripted, but not so tightly to lose the innate warmth of the compositions. "Santa Baby" is an unexpected delight, bright and fresh. "Have Yourself a Merry Christmas" is beautifully scored in a pleasant high register with elegant vocal filigree. The closing "Twelve Days of Christmas" is masterfully arranged and mildly reharmonized just enough to make it something very new. These are attractive settings for a well-known repertoire that enrich the music while relieving it of none of the necessary nostalgia that so precisely seasons these songs. 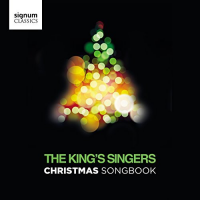 Not to be confused with The King's Men, the King's Singers have made a cottage industry of precision and accuracy in coral singling. This is not their first holiday disc. They have had many. The present Christmas Songbook is a contemporary celebration of the holiday season. Not overly Christian, they do include superb renderings of "In the Bleak Midwinter" and "Carol of the Bells" the sublime "Still, Still, Still." "Carol of the Bells" is crisp and clean. "Ding Dong Merrily on High" is a delight, while, Leroy Anderson's "Sleigh Ride" is brisk and American. But where is God and Jesus in the mix? The ubiquitous "Silent Night" is beautifully dispatched in English, as close as sub-freezing temperatures allow as Keat's writes, "Ah, bitter chill it was! / The owl, for all his feathers, was a-cold; / The hare limp'd trembling through the frozen grass, / And silent was the flock in woolly fold: Numb were the Beadsman's fingers, while he told / His rosary, and while his frosted breath, / Like pious incense from a censer old, / Seem'd taking flight for heaven, without a death..." Jesus is not excluded from this musical discussion. But this collection is focused more toward the secular than the religious. The holiday season is an event for everyone. 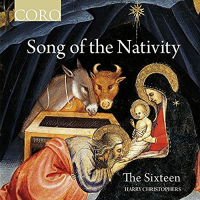 The Sixteen, Harry Christophers
Song of the Nativity
Coro Records
2016

Facing a greater and greater challenge to produce a Christmas project of substance and staying power, Harry Christophers and The Sixteen always seem to manage. This season's addition, Songs of the Nativity, Christophers ups the ante with an inventive program within a novel structure. The present collection alternates more traditional carols with more recent compositions with more progressive harmonic demands. There are no standard Renaissance choral pieces here. Rather, most works are 20th century and beyond and of English origin save for the program opener the sumptuous "O magnum mysterium" by American composer Morten Lauridsen. Lauridsen's setting was not, scripture inspired, rather from the painting <Still Life with Lemons, Oranges, and a Rose by Francisco Zurbarán (1598-1664). This collection complements the specialized talents of The Sixteen, whose tone is quicksilver sleek with clarity at depth. John Rutter, Cecilia McDowall, and Bob Chilcott have selections is this thoughtful and well-planned collection. 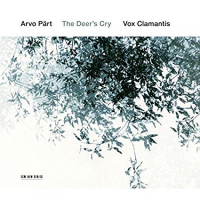 No, this is not so much a Holiday recording, Pärt, however, is the dean of contemporary choral composition. His composition, The Deer's Cry was most recently addressed in superb fashion by Harry Christophers and The Sixteen. That said, Pärt's spiritual recording home is with ECM Records and Manfred Eicher, who in 1984, inaugurated his ECM New Series with Pärt's Tabula Rasa, going on to champion the music of the Estonian composer. Appropriately, the Estonian vocal ensemble Vox Clamantis renders a very ECM production of Pärt's setting of the old Celtic Prayer "St. Patrick's Breastplate." Spatial is the best description of Eicher's vision for the sound of Pärt compositions. This space provides the composer's unresolved melodies plenty of room in which to expand. When considering Pärt's more popular pieces, such as Da Pacem Domine, ensemble director Jaan-Eik Tulve suggests that the ensemble's approach to Pärt: "Even though verticality is important in Arvo's music, we're also always searching for horizontality, for the legato, the smooth merger of different sounds and colors. I've never willfully aimed to do something wholly differently than others; rather, I strive for that which in my own eyes seems right and honest. To get at the core of a piece, one simply has to sing it a lot at first. Only then will one gradually begin to grasp its true contents—so as to finally omit everything superfluous. It is very characteristic of our ensemble to try and achieve maximal expression by minimal means." It is this type of attention that suspends Pärt's music in a sonic realm apart from other contemporary choral composers. In Vox Clemantis, Pärt meets his greatest instrument. 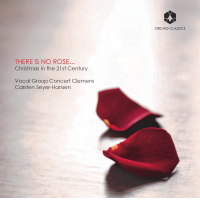 Vocal Group Concert Clemens
There is No Rose
Orchid Classics
2016

Where Vox Clemantis builds cathedrals with no walls, the Danish Vocal Group Concert Clemens presents a fully formed and realized architecture. Using the image of a rose, prominent in choral writing, director Carsten Seyer-Hansen weaves together a holiday tapestry that is at once integrated is performance and celestial in scope. The centerpiece is Pretorius' "Es ist ein Ros" arranged here in several settings. The program presented on There is no Rose is arranged and/or composed since 200 by mainly Danish and English composers. The intention was to present well-known and lesser-known music in fresh and appealing arrangements, many of which are premiered here. The sumptuous sound of Concert Clemens is creamy, but sharply defined. Many familiar pieces are fully transformed. Holtz's "In the Bleak Midwinter" perfumes like incense mingled with prayer. Paul Hillier's setting of "The Holly and The Ivy is likewise. The group ties the bow on with Hillier's arrangement of "Es ist ein Ros" which is simply beautiful.