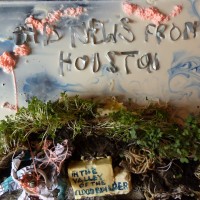 Confounding even those within the free improvised music community, pianist Thollem McDonas has made a name for himself by transgressing social and stylistic boundaries in search of musical truth and honest freedom of expression. It also helps that he is one of the most technically accomplished pianists around today. Despite his wealth of pure piano chops, McDonas is not a player who relies on technique to create interesting music. Armed with a new interest in electronics and a brace of new collaborators from within and outside of the realms of jazz, the Bay Area native is now making some of the most individualistic music around today. His second collaboration with Deerhoof guitarist John Dieterich, In The Valley of the Cloud Builder, is a case in point. Calling their cooperative duo "Bad News From Houston" is just one way of getting listeners closer to their daring music without getting tied up in who made it. Miles Davis used to do the same thing by leaving credits off of his albums. Miles' gambit seemed a bit unfair, since he was working with a dozen or so of the most adventurous musicians around. I'm guessing that Thollem and Dieterich, like Miles, just want to get us outside of our own heads and into the music.

Unlike Thollem, who has has extensive and rigorous training in classical music, Dieterich is an autodidact whose earliest musical experiences were in free-improvised settings. Though best-known for his work with Deerhoof, Dieterich has also worked with Jeremy Barnes (of Neutral Milk Hotel and A Hawk and a Hacksaw), Ben Goldberg and Scott Amendola. He's been working with McDonas for a few years, and In The Valley of the Cloud Builder is the duo's second recording. It sounds like nothing I've ever heard before. Much of the music on In The Valley of the Cloud Builder is dense and surreal. Yet, it is not directionless or random. On the contrary, each one of the album's ten pieces is highly organized and plotted out. While it's readily apparent that at least one of the dominant processes going on here is improvisation, In The Valley of the Cloud Builder is more about experimentation with sound; how it's produced, how it's captured, and when it's captured. What I can say is that the music doesn't seem to be connected to any single genre, though some of McDonas' inventions sound like something Conlon Nanacarrow might've come up with if he'd worked with a prepared player piano. There's a playfulness and innocence to this music that sets it well apart from most avant-garde or experimental music.

Several of the pieces start out as acoustic duets, only to be hurled into an otherworldly melange of whirring, buzzing samples, cheap electronics, prepared piano, disembodied voices and found percussion. The passages dominated by acoustic piano and acoustic guitar are often strangely beautiful and delicate, with McDonas' lonesome minor key chords casting a veil of sad mystery over Dieterich's gnarly John Fahey-esque inventions. Several pieces—"They War," "Mile High Desert Meadow Tea," "Red Dirt Meet," and "Stone Juice"—have passages of truly beautiful acoustic music before moving into other areas. The pair also seem to come up with insane, repetitious music-box like creations that hint at a sort of minimalism, yet are so texturally dense that one hesitates to use the term. On every tune, Dieterich and McDonas embark on deep timbral explorations of their respective instruments. While McDonas' prepared piano forms the backbone of the session, some of the sounds seem to be the result of close-miking their instruments, or recording one vibrating sympathetically in response to the other being played. Though their methods are not discussed in detail, the results are stunning. Whatever they're doing, the result has an almost luxurious aural richness—grainy, lo-fi environmental snippets lap up against pure layered tones of unknown origin. In The Valley of the Cloud Builder is one of those albums one can listen to over and over without ever hearing it the same way twice.

About Bad News From Houston