Tempus Fugit: Back Of My Hand 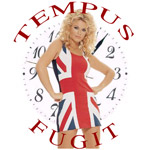 If politics is the new rock 'n' roll, then this reissue is proof that it was once the new turgid fusion with a side order of well-meaning vocals. British Prime Minister Tony Blair spent some of his college days fronting a happily unsuccessful rock band, and this release reveals that Jack Straw, Foreign Secretary in the Blair government, spent some time playing bass in and writing usually Marxist-Leninist lyrics for Tempus Fugit, a fledgling jazz-rock band whose fearsome virtuosity was matched only by its commitment to Socialism and the wholesale transformation of the Western world.

How times change. What we have here is music on the cusp of something else. Guitarist Roland Stannard was responsible for the majority of the compositions, and on the likes of "Fretboard Fondling" he perhaps unsurprisingly shows that he had chops, and maybe an uncommon number of fingers per hand. Keyboard player Russell Hope-Springs, according to the detailed booklet notes, was intent on sounding "like Leslie West on a Fender Rhodes piano," an admission to which nothing can be added.

Many bands from this period spanning the mid to late-1970s spent more time on the road than they did in the studio, which raises the issue of whether or not this music should be seeing the light of day. The release is more than justified, apparently, as it manages to preserve something of a heady night at the Alhambra, Dagenham, when the band played like there was no tomorrow and members of the less than capacity audience believed living to see the new day was being unrealistic.

Some listeners might feel the same upon hearing the vocals of "the other Dawn Muir," although the calibre of Straw's far from brawn-free bass is high enough to suggest, even after all this time and all this travelling, that the politics of convenience was far from being his only career option.

The bandmembers handle vocals themselves on "Ladies Of The Road, where Straw's way with words renders these charming lyrics: "Down below / In the region of the loins, Down below / Where you make your coins." Clearly neither doctrinal purity nor the revolution itself could alter the view that the position of women in the new society was exclusively horizontal.

The Great Gates Of The Last Bastion Of Capitalism Parts 1-4; May The Streets Run Red With The Blood Of The Capitalist Running Dogs; Drum Solo; Love Is Akin To The Dove Of Peace, parts 1-6 (featuring Mogadon); Ladies Of The Road; Fretboard Fondling.