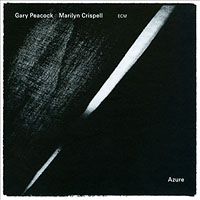 Who leads a project is often nothing more than a matter of optics. Bassist Gary Peacock's name may come first on the cover of Azure, but there's no doubt that this is a collaborative affair, with pianist Marilyn Crispell an equal participant; the two even co-produced the recording, with label head Manfred Eicher nowhere to be found. Peacock and Crispell have worked as a duo for years, in addition to delivering two sublime trio recordings for the label with the sadly departed Paul Motian: the pianist's ECM debut, 1997's Nothing Ever Was, Anyway, and the even more impressive Amaryllis (2002). Still, even those recordings were shared affairs, with compositional contributions from all three on Amaryllis (Nothing Ever Was paid tribute to the music of pianist/singer Annette Peacock). Azure, however, represents the first time the work of this longstanding duo has been documented.

Some have suggested that Crispell's more aggressive pre-ECM stance is evidence of artistic constraint by the label, but Azure proves nothing could be further from the truth. Peacock's discography as a leader/co-leader for the label—including his landmark Voices from the Past—Paradigm (1982) and duo date with guitarist Ralph Towner, A Closer View (1998)—demonstrates his love of space, decay and melody. It also suggests a penchant for unfettered freedom, which nevertheless eschews aggression, instead occupying a sparer place where silence is an equal partner.

That is no surprise, really, given Peacock and Crispell's shared connection in Buddhism and meditation. Crispell's ECM output has, indeed, been similarly predisposed towards the quieter end of the spectrum, but on recordings like One Dark Night I Left My Silent House, her completely improvised 2010 duo recording with clarinetist David Rothenberg, the pianist made clear that oblique strategies remain an essential part of her vernacular.

As they do for Peacock. He may spend some of his time mining the Great American Songbook with Keith Jarrett and Jack DeJohnette—recently on Somewhere (ECM, 2013)—but at the end of the day it's all part of the same continuum; it's all just music. Here, the duo opens with Crispell's aptly named "Patterns," its series of knotty thematic constructs played with temporal flexibility by the pianist (in impressive unison, with both hands), acting as a foundation for some jerky interactions with Peacock, but four songs later her "Waltz After Dave M" explores melody in a most personal way; more clearly structured, it shows Crispell and Peacock at their most eminently lyrical and unashamedly beautiful.

Peacock's tone is warmer than usual, and on his abstract "Puppets," he delivers a rare arco solo, reaching for the outer edges and pushing through them to a more rarefied space; still, as esoteric as his playing might seem, there's always an inner logic and unerring focus.

Peacock returns to pizzicato on the closing title track, one of three completely free improvisations. Paradoxical in its combination of hovering stasis and forward motion, it feels both as structured and thoroughly open as all of Azure's eleven tracks. A long time coming, Azure demonstrates, with pristine clarity and utter transparency, a unique partnership now finally unveiled for a larger audience on the year's most superb—and revealing—duo recording.