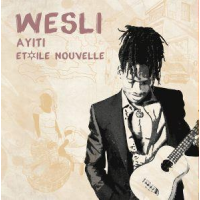 There is no other country in the western hemisphere that has been so grossly neglected and misunderstood as Haiti. In a historical context, it has contributed much in spite of overwhelming conditions, and has socially and culturally remained vibrant and vital. Vodou, the national religion of Haiti, has also suffered from lack of acceptance and understanding outside of its loyal practitioners. With its strong African roots, vodou is a rhythm and dance oriented tradition that continues to exert a powerful influence over musicians and artists of Haitian ancestry.

The popular singer songwriter Wesli (Wesley Louissaint) is a native Haitian who came up in the local church bands and choirs, paid his dues in West Africa, and transplanted to Montreal for creative purposes. Ayiti Etoile Nouvelle is a bold statement of national pride which runs the gamut of Haitian musical styles, all sung in Kreyol (creole) for legitimacy and essence.

Opening with "Rara," the defining music of the street carnivals, it is performed with a strong percussion ensemble with a fierce propulsion. "Latibonit," a praise to the country's western region, "Mon Konpe," and "La Peson," are portrayed in classic compas style with a predominant accordion laying the melody lines. "Sonje," is a swaying ballad with a lead kora (string instrument) and rising female chorus. "La Vi Dwol," carries a strong Bob Marley sentiment and impression, and is representative of the multiple influences on the project.

The more contemporary mizik rasin (roots music) style is brought forth on "Eya He," highlighted by its accelerated samba oriented beats. Wesli deftly incorporates the rasin feel to reggae in "Mizik Zaa," which flows with a strong Caribbean current. It's back to the infectious compas with "Manze," the closing song of the record. On this song, as with the other compas oriented tracks, Wesli displays his ability to convey the meaning of the lyrics with an impassioned emotion and veracity.

Wesli's mother is a pastor in Haiti, and vodou has been incorporated deep into his religious beliefs as well as his musical legacy. He is the rare performer who not only carries a message of hope, but reaches back to lift up those he left behind. His homeland has much to offer the world in lessons of resilience and optimism, as they have simply refused to give up. These songs are a testament to that spirit.