Steve Lacy: Avignon and After Volume 2 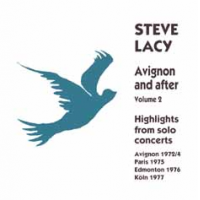 In 2012, Emanem released Avignon and After Volume 1 which consisted of re-released and previously unreleased tracks from the late great soprano saxophonist Steve Lacy's first solo concerts, at Avignon in 1972, plus previously unreleased tracks recorded live in Berlin in 1974. It was an excellent and valuable addition to the Lacy discography. Teasingly, its sleeve notes hinted that there was still enough unreleased Lacy material for another volume. Now, to confirm that, here is that second volume as promised. In contrast to the first volume's two dates and concert locations, the eleven previously-unreleased tracks here originate from five separate solo concert venues between August 1972 and December 1977. In compiling the album, Emanem proprietor Martin Davidson says he "decided to select performances that are relatively rare compositions and/or very fine renditions, and which therefore add something to those already published."

Right from the start of the album, the music supports that statement. Surprisingly, the first three tracks originate from Lacy's 1972 Avignon concerts, which seemed to have been fully documented by Volume 1. They are all versions of well-known Billy Strayhorn compositions—"Johnny Come Lately," "Lush Life" and "UMMG"—which were used as openers to the two concerts and are relatively brief, the longest clocking in at just over three minutes. Lacy plays them straight, stating their familiar themes then subtly exploring them as if in appreciation. Taken together, as a nine-minute suite, they hang together well as a tribute to Strayhorn and make a fine start to the album.

The transition to three 1974 recordings from Avignon is seamless, despite the compositions being by Lacy himself, not Strayhorn. The saxophonist's approach is similar on "Moms" and "Pops" (the first two tracks of his Shots album, incidentally) as he repeats their melodic themes and explores them without straying too far. His tone and rhythmic sureness of touch are a joy to hear, and they carry the listener along in a way that feels irresistibly natural and logical. "The Dumps," which closes the Avignon section, is joyous in a different way, a freer piece that strays further from its initial theme as Lacy goes wherever the mood takes him.

Across the album, the sound is consistently good so that there are few obvious indications that the music comes from diverse sources. In his notes, Davidson refers to "the inevitable compromise between removing hiss and hum and leaving the music intact." Despite that, he has done a fine job in cleaning up the sound, and no distracting noises are in evidence. However, the differing recording techniques used and acoustic properties of the original spaces did create differences of sound, so the shifts of scene to Paris 1975, Edmonton 1976 and Köln 1977 are detectable, but not intrusive.

Such considerations pale into insignificance compared to the wealth of music that this album contains; each of its thirteen tracks is a gem. Right at the centre of the album sits "Slabs," making its recorded debut here. Alone, it more than makes the album irresistible; featuring a typically engaging theme from Lacy, it is made special by the saxophonist engaging in a call-and-response duet with himself between two registers of his sax playing contrasting phrases. Stunningly simple but simply stunning—an apt description of the entire album, too. Fingers crossed that there is still enough left for a third volume...