Of Cabbages and Kings: Aura 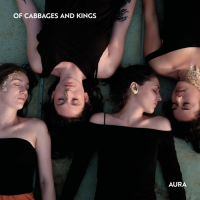 On Aura, the first album by self-styled neo a capella quartet Of Cabbages and Kings, we find ourselves dancing on razor-edged arrangements of popular songs, settings of Shakespeare and Brecht, and originals besides. The vocalists are Veronika Morscher, Sabeth Pérez, Rebekka Ziegler, and Laura Totenhagen. The many shades of meaning in their music outnumber even the letters of their names, each a doorway opening to another. Among them, Ziegler's voice as both composer and performer is especially broad. This is clearest in "M" and "Letter No. 2," both of which make appearance on the 2018 debut of her band Salomea. These are insightful looks inward, as emotionally diverse as they are atmospherically consistent.

It's in a beautifully arranged rendition of "Overcome" by British singer-songwriter Laura Mvula that the quartet's spiritual recasting of our postmodern world is introduced. Here we encounter a landscape grazed by hands that feel decades older than they are. Such is the timeless effect of their voices. Relationships (and transcendence of them) are upheld as the album's perennial theme, finding harmonic honesty in "Do Not as I Do" and the brilliant "Am I Still Facing Love." The latter shows us what happens when we fall into rhythms that are too comfortable, and the possibility of that which once overtook the self now running aground on the shores of faded romance. Further highlights in this regard include a jazzier take on Shakespeare's sonnet "My Love is as a Fever" and the spoken polyphony of "Lust." In each, the singers unpack a weathered rhythmic suitcase and rearrange its contents in a unique way.

Most remarkable about OCAK is their sense of dynamics, which always serves the texts and allows for a chameleonic breath to flow. Thus, they achieve a remarkable contradiction in their art by creating from four distinct voices a collective fifth. Like the chains of "Am Morgen Dann" and "Rezept," they hold integrity by means of unexpected links, all the while keeping us in their rearview mirror.