By JOHN SHARPE
September 6, 2020
Sign in to view read count 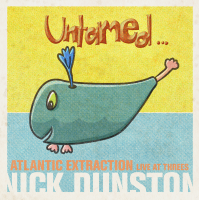 Bassist Nick Dunston, an alumni of the groups of Vijay Iyer, Dave Douglas and Tyshawn Sorey, was responsible for one of the debuts of 2019, with Atlantic Extraction (Out Of Your Head Records). Taking that title as its name, the same quintet inaugurates OOYH Records digital only Untamed series which aims to release high-quality performances with a quicker turnaround than a traditional studio album. Though more lo-fi than usual, (this one was recorded on an iPhone), the music on this live recording from Threes Brewing in Brooklyn in February 2020 is indeed first rate.

Whereas in the studio, Atlantic Extraction presented an enthralling mix of crisply plotted charts and febrile interaction in a suite-like structure, studded with unaccompanied pieces and collages, the live album comprises two lengthy performance extracts, which contain some of the same material but in a different guise. The half hour long "Part I" begins with a minimalist pulse from Louna Dekker-Vargas' flute and the leader's bowed bass, before Ledah Finck on violin adds just a touch of melody. Buffeted by intermittent shimmer from drummer Stephen Boegehold and incisive twanging guitar from Tal Yahalom, the band shows tremendous restraint as it maintains the meditative mood.

Thereafter Dunston marshals his resources in a dizzying kaleidoscope of combinations which hint at the diverse backgrounds of the participants in contemporary classical, improv and jazz, but never explicitly settle in one or the other camp. Although the detail can be a little murky on occasion, there's still enough clarity to discern the fertile imagination, formidable musicianship and laser focused intensity at play. What's scripted or spontaneous seems beside the point, as Dunston and crew have created a shape shifting extravaganza which deserves to be heard.

"Part II" starts with the distant tapping rhythm, possibly beat out on the body of the double bass, which introduces "Globular Weaving" from the first album, with its bubbling flute motifs each finished off by a resounding guitar flourish. After further hyper-caffeinated adventures, an abrupt transition from a twiddly violin/guitar/bass theme to swirling flute and cymbals signals the final compositional reference of "S.S. Nemesis" with its the banjo-evoking "Oh! Susanna" deconstruction by guitarist Yahalom. Cue enthusiastic audience applause.

It's worth noting that in the time of COVID-19 all proceeds from Untamed album sales are given directly to the artists, and OOYH Records will be donating an additional $1 per album sold to an organization of the artists choosing.