Maximize your visibility at All About Jazz by upgrading your musician page from standard to premium. With it, you'll receive All About Jazz home page exposure, a highly stylized / ad-free musician page with bonus features and benefits, an ad, plus you control where you sell your music and so much more.
Learn More
498

Robert Fripp: At the End of Time: Churchscapes - Live in England & Estonia, 2006 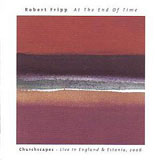 There are those who suggest that Robert Fripp has more than mined his innovative Soundscapes recordings for all they're worth; that one album fades into the next with little differentiation. Comparing the King Crimson co-founder and guitarist's At the End of Time: Churchscapes—Live in England and Estonia 2006 to Love Cannot Bear: Soundcapes—Live in the USA (DGM, 2005) lays easy waste to such claims.

Fripp has been evolving his guitar-as-orchestra concept for decades—initially by linking two reel-to-reel tape recorders in 1972 to create Frippertronics on the first of a handful of collaborations with Brian Eno; but later, with the advent of digital processing and sampling technology, into the much broader palette of Soundscapes. 1999 Soundscapes—Live in Argentina (DGM, 1994) was the first full album of Soundscapes and, listening to the seven albums he's released since, it's clear that each has its own premise, making it distinct and separate from the rest. Yes, some of the textures are consistent, but there's a world of difference between the more intensely dissonant 1999, the hauntingly poignant A Blessing of Tears: 1995 Soundscapes Vol. 2 (DGM, 1995), and the no less beautiful—but perhaps more provocative—Love Cannot Bear.

Recorded on a tour of churches in England and Estonia in 2006, At the End of Time also demonstrates that, while Soundscapes recordings might seem completely extemporaneous, there are often underlying premises used to create basic contexts over which Fripp can improvise—and which can be expounded upon themselves. Here, there are three different versions of "Evensong" and "Evensong Coda," and two takes of the title track, all recorded in different venues. With the amount of sound sculpting going on, it's difficult to know how much the sound of these beautiful cathedrals—illustrated in the liner notes—contributed to the overall ambience of these gentle pieces, which are often lulling in their quietude but, unlike pure ambient music, demand attention, at least on a subconscious level.

By using these three pieces as the focus of At the End of Time, Fripp has fashioned his most suite-like Soundscapes disc yet. "Threshold Bells: St. Paul's" acts as an introduction: not exactly jagged, but less enveloping, with Fripp's chime-like guitar gradually evolving into a more lush landscape that segues into "At the End of Time: St. Paul's." The unexpectedly jagged miniature "Future Shift: Haapsalu" creates vivid contrast, leading into the final "Evensong" and "Evensong Coda," recorded in the same location.

Every Soundscapes recording has its charms, but there's a thematic consistency on At the End of Time—an album of subtle beauty that uses dynamics with the precision of an artist instinctively paying attention to the finest detail—that makes it clear there's still plenty of territory left to explore.