By George Kanzler
July 2, 2007
Sign in to view read count 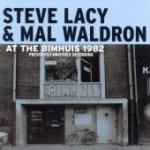 Soprano saxophonist Steve Lacy (1934-2004) and pianist Mal Waldron (1925-2002) worked together in bands from 1958, but coalesced as a duo in 1981, continuing sporadically for two decades. Both expatriates in Europe, At the Bimhius 1982 captures them at the Amsterdam club in December of that year in just-now-released recordings.

Although Lacy was associated with some of the leading members of the avant-garde and Waldron played with many hard-bop and modern giants, neither musician can be easily pigeonholed stylistically, as both had highly personal, idiosyncratic approaches. And they were never more personal than when playing in intimate situations like duo or solo (Lacy was one of the first saxophonists to make an a cappella solo album). So this CD, with its detailed, high quality 'live' sound and the Bimhuis' excellent piano, is a welcome addition to the recorded oeuvre of this splendid jazz duo.

What both players had in common was a fond appreciation for the music of Thelonious Monk. Lacy had experience playing with Monk in the 1960s and was one of the first to record albums of Monk's music. Waldron drew on Monk's approach to space, spare attack, forceful, and deliberate touch. The last three of five tracks here are Monk compositions.

After a brief piano intro, Lacy sidles into the melody of "Reflections, Waldron feeding him Monkish chords, meandering out of it into his own variations that flow so organically that they conjure Monk's spirit warmly. Lacy, a master of the soprano saxophone's many aural shades, elicits a rich singing tone ranging from burly to birdlike on "'Round Midnight, backed by heraldic piano chords and Waldron's solo brooding on familiar Monk piano tags.

"Epistrophy is taken at a slower, more ruminative tempo than usual—slow triplets backing Lacy's elaborations of the melody—until Waldron, with suggestions of Monk's stride, creates his own cinematic melody improvisation. Lacy's "Blues for Aida mines the rich mid-register of his soprano in a stately pavane; Waldron's "Snake Out stakes out the duo's avant credentials.

Blues for Aida; Snake Out; Reflections; 'Round Midnight; Epistrophy.