BY JEFF DAYTON-JOHNSON
September 4, 2008
Sign in to view read count 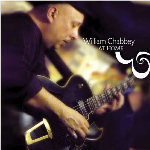 On At Home, guitarist William Chabbey and his group turn in a performance with all the buoyant self-assurance of an early-'60s Blue Note date. Of course, what distinguished the Blue Note records of that period from those of other labels was that the company paid for a day of rehearsal in addition to the recording date: the records consequently sounded both fresh and well prepared. These days so many new records sound exceedingly well-rehearsed: strangely enough, the difficult bit is capturing that looseness, pregnant with possibility, that characterized so many a session during the heyday of post-bop jazz. To his credit, Chabbey manages, oxymoronically, to sound loose and tight at the same time.

The first six cuts on At Home, featuring Chabbey's quintet (on a couple of numbers pared down to quartet or trio), not only capture that Blue Note energy, but they would not sound out of place on a release from that era. The final three numbers feature Chabbey in a trio with accordionist Didier Ithursarry that ranges from mildly to very French-sounding, with swirling 3/4 and 6/4 time signatures and Gallic themes.

Chabbey's sound exploits low treble and the sonority of his open-bodied guitar (which was built by his father). The guitarist's soloing is more Wes Montgomery than Django Reinhardt. He has a bit of the elegance of Joe Pass or Chabbey's unjustly under-appreciated compatriot Frédéric Loiseau, but with more than a little grit, too.

Saxophonist David Sauzay arranged two tracks here, and composed two others. His fast-out-of-the-gates solo on "Big Will" is worthy of the Jazz Messengers. Trumpeter Fabien Mary sounds comparatively more timorous, but he too has his moment of glory in a suitably soulful solo on the aptly named "Soul Jazz." In fact, everyone shines on this idiomatic number: Chabbey's solo features a vigorous passage based on strummed octave notes right out of Wes Montgomery's playbook. "Soul Jazz," akin to Herbie Mann's "Comin' Home," suggests that Chabbey would thrive in an organ-based soul-jazz combo.

Drummer Mourad Benhammou's vigorous break on "Mister Brown" is another high point. The number is a tribute to the late drummer George Brown, one-time sideman to Wes Montgomery and Kenny Burrell (to name only the guitarists with whom he had worked) and long-time French resident, with whom Chabbey has played over the years.

Although Chabbey and his bandmates really swing on the harder-charging tunes, two slow numbers—"Super 404," from the "Blue Note" portion of the record, and "La belle," from the "French" part—are argubably the record's finest moments. Both underscore Chabbey's fine skills as a composer and as a thoughtful improviser.