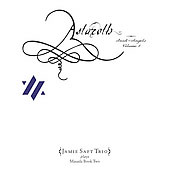 With Sanhedrin: Unreleased Studio Recordings 1994-1997, saxophonist/composer John Zorn put a period on what turns out to be but the first phase of his Masada project. His voluminous Masada songbook, first emerging in '94 with his quartet featuring trumpeter Dave Douglas, bassist Greg Cohen, and drummer Joey Baron, has gone on to a wide variety of interpretations, including solo guitar, piano/violin recital, string trio, and electric octet.

But when Zorn indicated in the liner notes to Sanhedrin that he had composed an entire second book of Masada music in an almost ridiculously short period of time, the question arose as to whether there was something new to be said, after over two hundred compositions in the first Masada songbook so vividly and completely explored the juncture of traditional Jewish music and a variety of improvising contexts. Based on the first recording of Masada Book Two material, Astaroth, Book of Angels, it's clear that Zorn's frenetic imagination has yet to run dry. In fact, there are a number of surprises about Astaroth that create high anticipation for future Book Two releases.

First is that, while Zorn continues to mine the harmonic territory of Jewish music, the overall aesthetic seems less direct, with the pieces now subsumed as part of a greater musical whole that recognizes broader thematic and rhythmic concerns. While some might accuse Masada Book One of ultimately becoming predictable, including hypnotic rhythmic foundations for some pieces, and rapid-fire themes for others, breaking down into chaos only to be magically pulled back at their conclusion, the material on Astaroth feels less categoric. And while nobody could accuse the Book One recordings of being anything but open-ended in terms of improvisational potential, the Book Two material feels somehow less rigidly of a kind.

But perhaps the biggest surprise is Jamie Saft—a keyboard player who has always seemed more a jack-of-all-trades, but here demonstrates an heretofore unheard talent in context of a traditional piano trio format (also featuring Greg Cohen and drummer Ben Perowsky). In the past, Saft's contributions have tended to feel more like confection, textural icing on the cake. Here he demonstrates an unfettered imagination and sense of invention that, for perhaps the first time, truly dominate. Capable of lyrical economy on the relaxed vibe of "Shalmiel and the melancholically bluesy "Lela'hel ; harder-edged expressionism on "Ygal ; flat-out swing on "Ezeqeel and "Sturiel ; naïve innocence on "Ariel ; and darker abstract impressionism on "Baal-Peor, Saft's performance on Astaroth deserves to see him reach a larger audience.

Cohen and Perowsky are equally impressive, but that comes as less of a surprise. And with Cohen having been a member of the flagship Masada quartet from the mid-'90s, there's an undeniable continuity between earlier efforts and this new phase in Zorn's investigation of the varied possibilities of traditional Jewish music. If Astaroth is any indication, Zorn's Masada projects will continue to retain a specific identity, while branching out into even broader areas of exploration.

Visit Jamie Saft on the web.