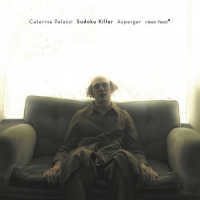 An album dedicated to villains in Disney films might be brushed off as novelty, but those that do would be mistaken. Rather than childhood fears, the tunes on Caternina Palazzi Sudoku Killer's album Asperger explore a dark and sinister side to being, like a non-stop view of a snarling Donald Trump barking insults from an 85-inch flat screen.

A mix of prog rock and jazz idioms, the gloom of Palazzi's compositions pervades the very pores of the music. The songs find crevices and caves to explore. The artists offer landscapes of fuzzy and distorted sax solos and improvs, guitar full-chord explosions and trills (plus some spaghetti western twangs), solid and muscular drum beats, twisted bass bowing and plucking, and the occasional elephant roar or jack hammer effect.

Each song has its own persona. "Grimilde" features drum marches and tough precise attacks. "Jasper and Horace" creeps along like a brown recluse under a bed before driving powerfully to a conclusion. "Maleficent" sounds like King Crimson's "21st Century Schizoid Man" reimagined. "Edgar The Butler" ends in a drunken stagger. "Medusa" whirls in a kind of demonic dance.

While listening, one can be forgiven for conjuring up images of David Lynch's masterpiece "Lost Highway." Like an unrelenting nightmare that one cannot wake up from, Palazzi's Asperger portrays a cerebral, disturbing, dark existence.

Grimilde (From Snow White); Jasper and Horace (From 101 Dalmatians); Maleficent (From Sleeping Beauty); Edgar The Butler (From Aristocats); Medusa (From The Rescuers).