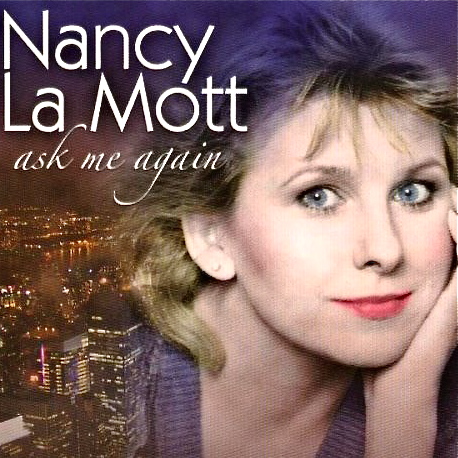 Nancy LaMott's story is the stuff of Hollywood melodrama—and a lesson about time. When she died on December 13, 1995 from uterine cancer preceded by years of battling Crohn's disease followed by an ileostomy, she left behind a scant but distinguished discography of six precious CDs. Even those became unavailable when, after a marriage hastily assembled during the last 45 minutes of her life, litigation ensuing from estate squabbles led to suppression of her recordings for almost ten years. In 2005 a complete, ninth-inning live performance was released (At Tavern on the Green, Midder Music), and in February of 2008 this collection of LaMott performances culled from various sources and venues, ranging from radio programs to a show at the World Trade Center, joined a contemporaneously issued DVD and has enjoyed the widest reception of any LaMott recording to date.

The temptation to pass this one up is admittedly great. An assortment of radio broadcasts and performances recorded under less than optimal musical or technical circumstances, along with the inclusion of "Moondance" and "The Wind Beneath My Wings," might discourage even a LaMott completist. But hers is a unique talent never ceasing to surprise and delight in deeply moving ways. From the very first track the voice is simply stunning, all the more so for being so nakedly exposed. Sinatra and Nelson Riddle, Tony Bennett and Bill Evans, Mabel Mercer and Bobby Short, Elizabeth Schwarzkopf and Gerald Moore—Nancy LaMott and pianist Christopher Marlowe: the messenger and the message are uncluttered and unplugged, the communication forever present and alive, the language of emotion as direct and pure as it gets.

The diminutive, courageous singer transforms the Gershwin title song from an obscurity to a familiar friend, exposes in full the lyric as well as melodic potential of Ellington's "Sophisticated Lady" (who makes too little of her time), laments the tragic wasting of time on Jule Styne's "Killing Time," and demonstrates its best uses on Berlin's "Cheek to Cheek," her duet with Marlowe as felicitous, fresh and "in time" as that of the pair—Fred Astaire and Ginger Rogers—for whom it was written.

Not until the ninth track of the first disc, "Call Me Irresponsible," does the audio come up noticeably short, yet the vocalist's powerful, impassioned reading of the Van Heusen-Cahn standard simply can't be denied, perhaps matched only by Sinatra's performance of the same tune. LaMott's is a voice that can instantly transform itself from defiant indestructibility and back-row explosiveness into meditative, intimate vulnerability, which is the prevailing mood of the second disc. Since one of these latter tracks, ironically Rodgers and Hart's "I Didn't Know What Time It Was," was recorded a mere four days before the singer's death, these subdued readings are heightened in their poignancy.

This may be the best Nancy LaMott album of them all, and if Jonathan Schwartz, quoted in the liner notes as once insisting that LaMott's would become "the voice of its time," seems slightly off in his prediction, it's merely in the timing.

Disc 1: You and I; Ask Me Again; The Shadow of Your Smile; Cheek to Cheek; Sophisticated Lady; On My Way to You; Easy to Love; Killing Time; Call Me Irresponsible; Right as the Rain. Disc 2: Moondance; You're Getting to be a Habit with Me; September in the Rain; I Only Have Eyes for You; The Wind Beneath My Wings; You'll Never Know; The Music That Makes Me Dance; No One Is Alone / Not While I'm Around; I Didn't Know What Time It Was; Have Yourself a Merry Little Christmas.