Dalia Faitelson: As The World Sleeps 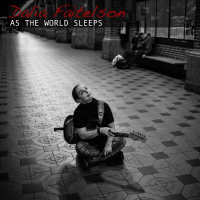 Danish, Israeli-born vocalist-songwriter and guitarist Dalia Faitelson calls her new collection of original songs—all born in the still, dark hours of night, the times that dreams are born—"a kinky jazz salute to Marlene Dietrich." In a way, Faitelson, like Dietrich, reinvents herself. Leaving aside her world music project Pilpel to acknowledge the formative influence of songwriters like Joni Mitchell and Tom Waits, but channeling such influences through an intimate, cool acoustic jazz setting.

Faitelson is accompanied by a core group comprised of double bassist Thommy Andersson, percussionist Lisbeth Diers and the Tajj String Quartet from Serbia. Engineer Jan Erik Kongshaug of the famed Rainbow studio in Oslo mixed and mastered the album and beautifully captured a warm, introspective sound.

Nine songs highlight Faitelson's sensual, clear delivery on these evocative song-stories, embraced by a gentle and fragile envelope of strings and light percussive sounds. On the most appealing songs she forsakes this format and introduces newer sounds to this reserved setting, with light African touches on "Speculations," the tempting-smoky jazz setting on "Dance It Right," ornamented with West-African kora; and the whispering trumpet of Gunnar Halle that intensifies the intimate atmosphere of "Forsaken Destiny."

Two songs shine above all, in an enigmatic manner. The pair refer to personal history and Faitelson's image of herself— her solo, introspective "Scars of Silence," accompanied only by her guitar, in which she tells the story of a silent relationship, and the dramatic, Middle-Eastern-tinged "Secretive Soul."

The Faithful Night & I; A View of a Man; Speculations; Dance It Right; No Regrets; Scars of Silence; Forsaken Destiny; Round the World; Secretive Soul.