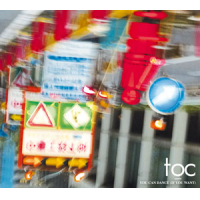 The French trio TOC--part of the musicians collective Muzzix in Lille, breaks all the rules and musical barriers on this, its second release, same as it did on its debut, Le Gorille (Circum Disc, 2009). These three skilled improvisers move freely between contemporary music, experimental pop, art and psychedelic rock, noise and fiery jazz with reckless energy, as if aiming to close the cultural gaps between the followers of composer Igor Stravinsky and those who listen to Sonic Youth--all done ...