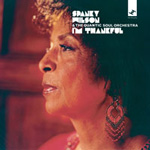 Upon her return, she was “discovered by multi-instrumentalist and producer Will Holland. Before they ...