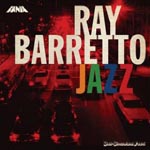 Although both of his parents were full-blooded Puerto Ricans, Ray Barretto was as American as they come. Born in Brooklyn, by the age of seven he had already resided in that borough, as well as Spanish Harlem and the Bronx. His biological lineage, combined with the place he was born and raised, gives new meaning to the concept of Latin jazz. Fania honors his legacy with a compilation featuring ten of the strongest works he recorded for the ...

Zoho Music has established itself as the pre-eminent purveyor of Latin jazz. Resurrected from the ashes of the former Khaeon label by Jochen Becker, Zoho boasts a stable of renowned and diverse musicians. Here are three of the best recordings recently released by the label.

Standards Rican-onditioned was the last recording released by New York percussionist Ray Barretto before his death in ...

By David Amram When Ray and I first met and played together in the Fall of 1955 at the Monday night sessions at the 125 club in Harlem, Ray was the only conga player and I was the only French horn player who always showed up. We used to always laugh because we were surrounded by a small army of great musicians who played what were then considered traditional jazz instruments. ...