While percussionist Michael Waldrop's previous work under the umbrella of the Origin imprint was firmly set in the jazz camp, with a pair of big band bonanzas and a magnetic trio date to his name and credit, this set typically moves beyond those borders, often offering an intriguing world music slant on contemporary classical percussion. Highlighting Waldrop's marimba (and vibraphone and drum set) work in a wide variety of settings, and showcasing his highly developed approach to composition and interpretation, ...

Drummer and educator Michael Waldrop focuses on both drum set and tuned percussion (marimba/vibraphone). He is a Professor of Percussion and Jazz Studies at Eastern Washington University. Recording for Origin Records since 2014, Waldrop has already released two offerings on the label: Time Within (Origin, 2015) and Origin Suite (Origin, 2018). Waldrop's 2020 endeavor Triangularity is a remastered reissue of an earlier album, with bonus tracks added to the original tracks. It features a core jazz trio comprised ...

Drummer / vibraphonist Michael Waldrop's intriguing Origin Suite (deftly arranged by Jack Cooper) sweeps away musical boundaries to make its points, one of which is that big-band jazz needn't be ensnared in a time warp but is capable of changing with the times to engender songs that are as aesthetically pleasing as they are thematically stylish. The three-movement suite, written to feature Waldrop on drums and vibes, calls to mind in its powerful opening and closing narratives ...

Percussionist and big band leader Michael Waldrop has had a very successful relationship with composer Dr. Jack Cooper, late of the University of Memphis, Berlin, and parts unknown. Waldrop attended the University of Memphis for his master's degree (helming Cooper's Jazz Orchestra of the Delta) before completing his doctorate at the University of North Texas. Their previous big band collaboration, Time Within Itself Origin, 2015) was received with favorable reviews at All About Jazz. This was Waldrop's debut recording leading ... 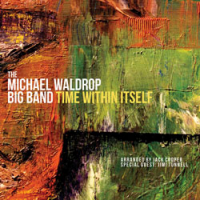 Drummer Michael Waldrop has named his inaugural album as leader of a big band Time Within Itself. An even more appropriate name might have been It's About Time. Waldrop, who has taught for the past decade or so at Eastern Washington University, boasts a resume as long as one's arm. It includes a master's degree from the University of Memphis and a doctorate from the University of North Texas where he was a member of the celebrated One O'Clock Lab ...