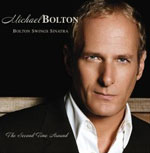 Michael Bolton would never have achieved the fame that he's garnered if he wasn't genuine. Sure, his sincere approach to singing takes him over the top. After all, he is an emotional performer. That red-faced, vein-protruding tightness comes with the territory, and it's brought him to the top of the pop, R&B and classical charts. He loves what he does, and this project derives from that persona.

Bolton doesn't try to be Frank. He sings these favorite Sinatra ...

Michael Bolton, with his overwrought remakes of soul and R&B hits, has been the laughing stock of critics for years, though his CD sales have always given him the last laugh. But his surprising change in direction to a straight-ahead jazz session of music from the vast repertoire of Duke Ellington shows him in a completely new light.