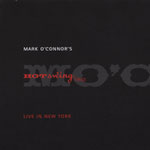 Damn, these bastards can play. Mark O'Connor, who was playing duets onstage with Stephane Grappelli every night when he was seventeen years old, has a truly formidable range of skills on jazz violin. He has assembled a crack band--Frank Vignola is mercurial and scary-fast on guitar, Jon Burr is everywhere he needs to be on bass. This live set from Merkin Hall, recorded in September 2004, is a very pretty document of what three people who are on the same ...