Lyle Lovett & His Large Band at the NYCB Theatre at Westbury

Lyle Lovett & His Large Band NYCB Theatre at Westbury Westbury, NY August 17, 2014 In the quarter century plus since his debut in 1986, Lyle Lovett has taken his place as one of the most original and unique singer/songwriters of his, or for that matter any, generation. His lyrics are smart, insightful, witty, literate, sardonic and eclectic covering a myriad of topics from his home state of Texas, to love, to loss, to yearning, ... 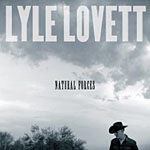 After emerging with the triple punch of Pontiac (Curb, 1988), Lyle Lovett and His Large Band (Curb, 1989), and Joshua Judges Ruth (Curb, 1992), singer/songwriter Lyle Lovett's career took a few detours. My Baby Don't Tolerate (Curb, 2003)--Lovett's first album of original material in five years, following a serious farm accident--warned that Lovett's characteristically dry wit was on the wane. Happily, with It's Not Big It's Large (Curb, 2007), Lovett returned with an album that comfortably blended blues, country, folk, ...