The Les Hooper Band: Out of the Woods 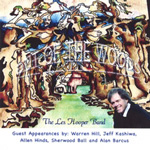 On “New Suit for Zoot" (aka “Tickletoe"), the latest edition of Les Hooper's southern California-based big band kicks the accelerator and really burns rubber. Unfortunately, that's one of the few high spots in an otherwise curiously lackluster album that seems to be aimed for the most part at what's left of the commercial jazz market. Hooper has a game plan, and he's at least upfront about it. “The range of music here is wide," he writes, “and ...

Here’s an unexpected but no less welcome windfall for big–band lovers. Composer / arranger / pianist Les Hooper has reissued four of his superb albums from the ’70s and ’80s on compact disc, the first two featuring his excellent Chicago–based group, the others an all–star West Coast ensemble. If you appreciate a big band that swings its kiester and aren’t too fussy about sound quality or playing times, any or all of these discs would greatly enhance your library.