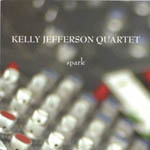 Spark, a deeply swinging, straight-ahead, no nonsense album from Kelly Jefferson, is a terrific listen from beginning to end. Canada strikes again! The eight tracks, all original Jefferson compositions, are on the long side, most ranging from seven to eleven minutes, which allows for some extended soloing and interesting arrangements. Jefferson has a big sound and a fertile imagination that produces tunes that have a quickly discernable structure and yet are interesting in their details. His rhythm ...