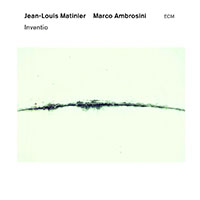 By this point heading for longstanding status with ECM Records, it's always intriguing to follow an artist through the label's discography, as one relationship seems to lead, inevitably, to another. While French accordionist Jean-Louis Matinier made his first appearance with the label on fellow Frenchman Louis Sclavis' Dans La Nuit (2000), it was his tenure with Tunisian oudist Anouar Brahem's Le Pas de Chat Noire (2002) trio, also heard on the 2006 follow-up Le Voyage de Sahar, that seems to ...