Alrighty then. It's the first week of a new month. Our regulars know it's time for Blue Note 50th anniversary salutes. We've got three for you from Duke Pearson and the big band, Detroit pianist Kenny Cox, and Jack Wilson. Continuing a series we started at few months ago, we have BN-4, two sides of a 12-inch 78 from 1939. And then there's our chronological Sonny Rollins celebration with a session with Miles Davis and a handful of 21st century ... 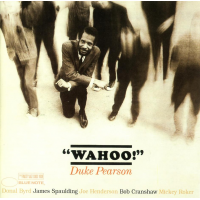 Duke Pearson occupied an unusual position within Blue Note Record's roster of artists. In addition to recording as both leader and sideman he also served as the label's A&R man, following in the footsteps of Ike Quebec. Pearson also served as the arranger on many albums, including sessions--Stanley Turrentine's Rough 'n' Tumble, comes to mind--where other pianists took over the keys. Pearson's own WAHOO! carries an exuberant title for what turns out to be a pretty laid back ... 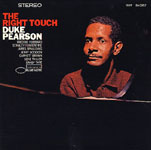 The six tunes, all composed and arranged by Duke Pearson, burst with a creative vitality that is complex and accessible at the same time. The compositions are both ...

While even the most successful attempts at blending jazz with bossa nova rarely result in a form of musical expression that moves beyond the tendencies of either, here is a style that does just that--an exploratory music we can confidently term the innovations of Duke Pearson.

Compiled from the pianist's late sixties Blue Note sessions, with a few tracks from 1970 included, there is little in jazz that bears resemblance to what we encounter on these five studio ...

In recent years artists such as Mike LeDonne and Jim Rotondi have brought to light the overwhelming lyrical gifts of composer Duke Pearson in their own recordings of some of his most memorable lines. Unfortunately, too much of Pearson's work lies just under the radar of your average jazz follower, a fact made all the more frustrating by circumstances that find very little of his catalog presently available on ...

The jazz scene is replete with artists who died before they were able to realize the extent of their capabilities; Dick Twardzik, Booker Little, and Scott LaFaro were prodigious talents whose small recorded output gives us only a glimpse of the enormous talent each possessed. Add to this list Willie Wilson, whose sole performance on record is featured on Duke Pearson's album Dedication, recently reissued by OJC.

This album not only proves that Wilson was a talent in the making, ...