Maybe the finest compliment you can bestow on an individual in our COVID-19 times is that he/she is a solid citizen, someone who takes it upon themselves to protect others from the dangers of this horrible virus. What does this have to do with the music of bassist/bandleader Dave Young? First, it is fundamental that all great jazz is built upon the foundation of a timekeeping bassist. Second, as evidenced by Young's Ides Of March, his solid hand upon the ...

It's a sign of the economic times (and a steadily shrinking audience) that more and more jazz CDs are being released these days in the near-equivalent of a “plain brown wrapper." That's certainly true of Octet Vol. 2, the second recording by Canada's Dave Young / Terry Promane ensemble. That does not mean, however, that the music enclosed therein is any less polished or pleasing than that produced by groups with far deeper pockets. Most of those in the octet ...

The Dave Young Quartet: Mean What You Say 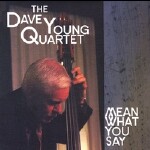 Dave Young has had a long career as a classical music and jazz bassist. Before he found his niche in jazz, Young was the principal bassist with the Winnipeg and Edmonton Symphony Orchestras as well as the Hamilton Philharmonic Orchestra. As a jazz musician, he brought his sense of rhythm and intuition to groups led by Oscar Peterson and Oliver Jones, among a host of others. Though he has had a prolific career as a sideman over the last 40 ...

Over the years Canada has produced its share of world-class jazz musicians who have reached widespread acclaim, including Oscar Peterson, Gil Evans, Paul Bley, and Kenny Wheeler. Lesser-known, but no less important, are support players like drummer Terry Clarke, who spent a number of years in New York and was a long-time collaborator with guitarist Jim Hall, before returning to Canada a few years back.

Bassist Dave Young, unlike Clarke, has remained in Canada throughout his thirty-year-plus career, but has ...