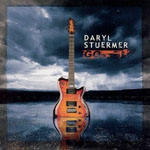 The peril of being a musical gun-for-hire is that it becomes difficult to know exactly who the artist really is. It becomes even more challenging when an artist like guitarist Daryl Stuermer works in seemingly disparate styles. Stuermer first emerged on the 1970s fusion scene, working with violinist Jean-Luc Ponty and keyboardist George Duke. But he quickly became the guitarist of choice for progressive-turned-pop group Genesis through to its 1992 demise, and has remained a member of drummer/singer Phil Collins' ...

To me, Daryl Stuermer is the ex-Genesis guitarist who did some '80s fusion album that's languished in deep-discount bins almost since its release. A new album doesn't exactly come with high expectations.

Middle-of-the-road instrumental pop, I figure, probably in an above-average wrapping. Nothing too daring on solos, and probably a good background listen when mental defenses are low, but not low enough light jazz starts sounding attractive.

Once in a rare while my instincts hit dead ...