You're IN the Band Cynthia Sayer 128 Pages ISBN: #978-0-578-17971-1 Cynthia Sayer Music 2016 Multi-instrumentalist, vocalist, bandleader and music educator, Cynthia Sayer's name might not be a bell-ringer, however I'd wager that you've probably heard her Hall of Fame banjo (Yes, there is one!) playing on film soundtracks, commercials, pop recordings--or, if you've been a lucky-so-and-so, live. At the request of her students, Sayer has compiled and published her thoughts, ... 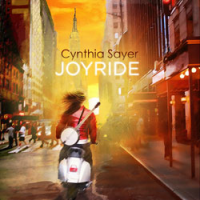 Banjo!--one's mental and aural images might include straw-hatted gents picking away at an attraction at Disney World, Stubby Kaye and Nat King Cole strolling in Cat Ballou, (Columbia Pictures, 1965) “The Beverly Hillbillies Theme," or perhaps the iconic “duel" from Deliverance (Warner Bros., 1972) There's probably no other musical instrument on the planet that's more associated with novelty, Americana and all-around Good Times.Joyride from celebrated jazz banjoist and vocalist, Cynthia Sayer, lives up to its title. And, while ...

While many people who are into jazz are always looking for the next newest thing (perhaps you), there are also people (perhaps you) who listen to jazz of the past and get transported to that place and time, or at least what is thought of as how things were then. In other words, the music, which was a part of the culture of ...

Time was when every self-respecting jazz band had a banjoist. The legendary Johnny St. Cyr did duty in both Jelly Roll Morton's Red Hot Peppers and Louis Armstrong's Hot Five, and he was just the preeminent member of a hearty and considerable band. Listen to the banjo breaks on those great early sides, and you get a glimpse into the folk roots of this music--its common roots with modern folk and rock. But on the jazz side of the street, ...

Taking up the instrument at the age of 13, Cynthia Sayer is now a top jazz banjo player in jazz rivalling Bela Fleck. Combining her banjo with a straight forward and sometimes rough and ready singing style, Sayer has parlayed this favorable marriage of skills into a very successful career, having performed with many top flight jazz artists, appearing live at many venues - - including the White House - - and working on the sound tracks of films like ...