Guitarist Bucky Pizzarelli, from 1926 to his passing at age 94 on April 1, lived his entire life in New Jersey, and had said that he couldn't imagine living anywhere else. Forget the turnpike jokes. Remember instead the nearness to jazz in New York, the closeness of family, shared driving in the New Jersey night, the miles that make a life. Formed by a World War II-era swing style, influenced by Django Reinhardt and Freddie Green, and the ...

The Fathers Day broadcast included new releases from Ayelet Rose Gottlieb, Roxy Coss, Anat Cohen and Camila Meza, with birthday shout outs to the songwriters Irene Higgenbotham, Ivan Lins and Cy Coleman, pianists Geri Allen, Monika Herzig and Daryl Sherman, vocalists Nancy King, Alicia Olatuja, and harpist Carol Robbins, among others. Plus we hear from some famous jazz Fathers and their children, along with a look at who played in town that week. Playlist Sue Maskaleris “The Big ...

Bucky Pizzarelli: Dean Of The Seven-String

Close to 65 years ago a 17 year-old guitarist named John “Bucky" Pizzarelli was tapped by big band leader Vaughn Monroe to sit in for a weekend. As a result, the jazz world gained what was to become one of its most significant practitioners, one who continues to perform and share his wisdom with a modesty that belies his stature. Born in Paterson, NJ, Pizzarelli is part of a tradition of great guitarists from that state that includes Tony Motolla, ...

Bucky Pizzarelli Performing at the Smithsonian Under a Cloud

Washington, D.C. consistently limps and trips from scandal to outrage. It is never surprising when yet another committee is formed to investigate the depths of the city's shallow political waters. The venerable Smithsonian Institution is not immune from such controversy. Although the rest of the country may think that the almost $700 million in annual government funding is utilized ...

Bucky Pizzarelli, a first call guitarist for decades, meets the young, versatile guitarist Frank Vignola on this studio session made for DVD. The veteran 7-string player, who previously recorded a duo session with Vignola for Hyena (Moonglow), has developed a distinctive sound that is quickly identifiable. Although a generation younger, Vignola, who is introduced by Pizzarelli as the “American version of Django," ... 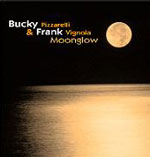 At least as evidenced by this collection of guitar duets, nothing but a mere few decades would seem to separate Bucky Pizzarelli (b. 1925) and Frank Vignola (b. 1965). Pizzarelli's lengthy resume includes years as a studio musician beginning in the '50s, touring with Benny Goodman, a celebrated guitar partnership with George Barnes, and popular stops along the way with Bobby Hackett and Bob Wilber, among others. Vignola, playing a six-string archtop guitar (and sometimes banjo), has always been a ...

Bucky Pizzarelli: Flashes: A Lifetime in Words and Music 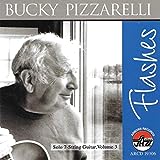 Veteran guitarist Bucky Pizzarelli's latest is a master class in the art of the popular American song as interpreted by someone who's spent a lifetime perfecting the language of swing. Combining solo guitar and spoken reminiscences, Pizzarelli retraces his long career through exquisite renditions of standards associated with colleagues and mentors like Henry Mancini, Richard Rodgers, Benny Goodman, Bing Crosby and Frank Sinatra. He also proves his dexterity beyond straight swing by tackling a trio of early jazz ...