Two decades have passed since alto saxophonist Brent Jensen recorded his debut album for Origin Records, Sounds of a Dry Martini: A Tribute to Paul Desmond, in 2001. To Jensen's surprise, the album became so enormously popular that the possibility of a sequel was envisioned. There was, however, one large stumbling block—by 2007, Jensen had sold his alto sax and switched to soprano. It was not until 2017, after he had moved to Seattle, Washington, and bought another alto, that ... 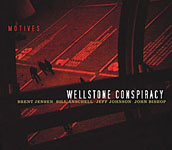 The Wellstone Conspiracy is a collective venture for four of the more prolific jazz musicians residing in the Northwest region of the United States. The group consists of Idaho-based saxophonist Brent Jensen and from Seattle, pianist Bill Anschell, bassist Jeff Johnson and drummer John Bishop. The quartet, previously heard together on Jensen's One More Mile (Origin, 2008), hits the mark with Motives, a disc full of stunning interplay and individual showmanship. A highlight of the recording is the ... 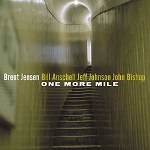 Idaho-based saxophonist Brent Jensen seems to have found his musical soul-mates in the Pacific Northwest. For One More Mile, the College of Southern Idaho professor teams up with three of Seattle, Washington's finest--pianist Bill Anschell, bassist Jeff Johnson and drummer John Bishop--for an intriguing straight-ahead set of standards and originals.

Jensen is a well-rounded improviser who can get things cooking in a variety of styles and tempos. With his warm-toned soprano saxophone front and center, he moves easily from a ... It seems fitting that Art of the Groove came out in mid-May, about a week before the late Miles Davis's birthday. The set spends some time—and spends it well—saluting the late trumpeter, most notably on the opener, with “Straight From Miles." Flugelhornist Rob Walker wrote the tune with phrases from the '58 recording of Davis's take on Thelonious Monk's “Straight, No Chaser." If this one doesn't have you thinking of Davis's '58 Milestones set, especially when Walker holds a horn ...

The Brent Jensen/Rob Walker Quintet opens in a mellow groove and stays there much of the way on this backward- glancing yet quite contemporary album that wouldn’t have been out of place in the bop-based Blue Note / Prestige catalogs of the late ‘50s–early ‘60s. Alto saxophonist Jensen and trumpeter Walker offer an earnest tribute to their musical predecessors—especially the legendary Miles Davis—without imitating them, choosing instead to invoke the spirit of the bop era while giving it their own ...

It's good to see that there are talented jazz artists who are willing to keep the "cool" school alive and well if for no other reason (and there are others) than to memorialize those great artists starting with Lester Young who brought this jazz genre to prominence. Riding on the featherweight, tuneful approach to improvisation and the slow almost invisible vibrato, artists such as Miles Davis, Lee Konitz, MQJ, Bob Brookmeyer and others became full-fledged members in the school or ...