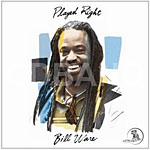 Never one to swoop into the limelight or blithely steal the show, vibraphonist Bill Ware has built a model résumé that weaves silently and inscrutably through the best of most modern genres. Ware's Played Right accordingly shows the touch of a resilient, serpentine stylist, a master of quiet spectacle. Titles alone offer a provocative cross-section of popular music's history--the Modern Jazz Quartet's “Django" follows a few cuts after Nirvana's “Smells Like Teen Spirit" and closes out in ...

Bill Ware and the Y2K Jazz Quartet: Keeping Up With the Jones

Milt Jackson, RIP. October witnessed the death of Milt Jackson, the preeminent vibraphonist of jazz. As the music progresses toward the 21st Century, Jazz will continue to lose the pioneers of the Bebop Era. Milt Jackson was an urbane guiding light who will be missed.

In Jackson’s shadow, forging their own are two mammoth vibes talents: Stefon Harris and Bill Ware. Harris has been well represented the last few months in these pages and so now it is Ware’s turn. ...