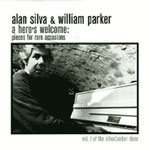 Alan Silva and William Parker collectively inform much of the role and possibilities of the acoustic bass that have been developed since the 1970s. From participating in Cecil Taylor-led ensembles and loft scenes to recording and performing some of the most challenging and rewarding music over the past thirty-some odd years, they have a storied and interwoven history. Consequently, an album of Parker/Silva duets could potentially be a historic moment. And while the results documented on A Hero's Welcome: Pieces ...

As the inaugural group for the 1999 Vision Festival, following closely on the heels of Joseph Jarman’s vocal invocation, Alan Silva’s Sound Visions Orchestra seemed the ideal vehicle to usher in the ten celebratory days of community-empowering creative music. Employing many of many of the festival’s performers and signaling the triumphant culmination of Silva’s ambitious plans for large-scale improvisatory interplay the group promised monumental music. Sadly a succession of sobering setbacks beset the band once they took the stage. First, ...

The practice of harping long and loud on the lack of public notoriety or understanding afforded creative improvising musicians has become an almost customary tack in reportage of the music. A “resignation to obscurity” mindset prevails among many producers, listeners and even musicians that this is orphic status is simply their lot in life. Still the musicians survive exercising their talents behind the veil of popular ignorance doing the only thing they must- nurturing and elevating their art beyond the ... Having come full circle, bassist Alan Silva returns to his roots on Transmissions. Silva's experience with seminal improvisers since the '60s has earned him a resume that reads like an international who's who of free improvisation. (Ironically, however, he has not received recognition proportional to his work.) Silva discovered electronics in the '90s and seized the opportunity to experiment with synthesized music. But in the '99 live concert documented on Transmissions, he's back at the acoustic bass, playing in the ...