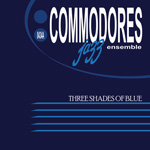 In fact, the Commodores are better than good, boasting enough seagoing firepower to stare down such well-equipped armadas as the Airmen of Note, Army Blues and other topnotch service bands without blinking, as they prove again on Three Shades of Blue. I've been a fan ...