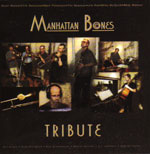 Calling all trombone enthusiasts! This septet includes four trombonists and devotes most of this album as an homage to jazz trombone moments of the past. Beginning life in Southern Maine as the “Maine Bones," this group gravitated to New York, took on a new identity, went through various personnel changes, and presents a tribute to trombone masters on its first album.

In addition to two original compositions by Scott Reeves, the album revisits J.J. Johnson's “Shutter-bug" from his ...

Congressional Roll Call is a jazz sextet led by musician and educator Scott Reeves. Reeves, who is on the faculty of the State College of New York, CUNY and the Julliard School, is also the author of books on jazz improvisation. As a composer Reeves penned five of the nine pieces on the recording. The CD also includes arrangements of standards such as Rodgers and Hart's “Spring is Here" and a Latin treatment of Kurt Weill's “Speak Low." Reeves is ...