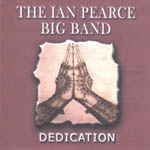 Most American jazz enthusiasts, if pressed to name a world-class British big band, would likely invoke the hallowed name of Ted Heath. Ask them to name another and you'd probably draw a blank stare. If, however, anyone were to answer with the name Ian Pearce, you'd have to jury-rig a fanfare and award him or her a gold star and high marks for having done their homework. Pearce's ensemble may not have Heath's star power, but it does have staying ...

The Ian Pearce Big Band: Prelude to the Blues

There are times when the second album by a given big band is disappointing when compared to the first. Happily, this isn’t one of those times. This is the more remarkable when one considers that all of the compositions and arrangements on Prelude to the Blues are Ian Pearce’s, whereas his earlier disc, Retrospection (Trip Records 011), enfolded eight well–known standards and such Jazz classics as “Moanin’,” “Cherokee” and “Intermission Riff.” Not only do Pearce’s laudable compositions sprint stride–for–stride in ...