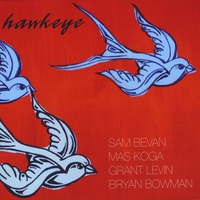 Hawkeye is the first release by a fine young quartet of musician, and a beautifully varied, eloquently played and intensely involving set of original compositions. The group, formed by bassist Sam Bevan and drummer Bryan Bowman, is based around the San Francisco area and brings together some young but talented players. Pianist Grant Levin and Japanese saxophonist/flautist Mas Koga complete the quartet. All four men contribute compositions to the album, also bringing their own ideas to the arrangements, leading to ...