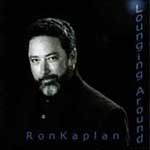 Recorded in 1999, this program features the velvety smooth baritone voice of Ron Kaplan singing timeless standards that have weathered changes in music and technology, and that we've all come to love. For Lounging Around he works with a small ensemble to emulate the unique Rat Pack ambience that has affected millions. How can we ever forget? Standards like “Just One of Those Things, “Caravan and “Blues in the Night recall the happy times when the lounges of Las Vegas ...

Ron Kaplan has recorded four previous albums with differently stuctured groups on his own Kapland label in the wish of preserving the music of the Great American Songbook. On his latest, subtitled “The Ron Kaplan-Weber Iago Album," he's accompanied only by pianist Weber Iago on nine songs.

Kaplan, a California native, studied with pianist Smith Dobson and plays several instruments. He ran a successful busines in a non-musical field but decided to return in the mid-'80s. The inspiration ...