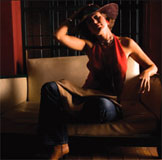 On this Toronto-based (but New York-born) vocalist's second release, she takes on several familiar standards with a personal signature, enhanced by a sparse instrumentation: here, she is accompanied solely by guitarist Ron Affif and bassist Jeffry Eckels, who play on all the tracks but the two Cole originals, the upbeat “Walkin' and “Morning With You, both of which feature fine work by Saul Rubin (guitar) and John Roche (bass). The album's title, which means “gypsy, is taken ...