Gil Scott-Heron, musician and poet much loved in the jazz community, passed away 10 years ago on May 27, 2011. His recordings of the '70s and early '80s are critical touchpoints of that era, documenting African-American indignity and pride with a raw street passion. His final release, I'm New Here (XL Recordings, 2010), his first in 16 years, was uncharacteristically preoccupied by family and loss. In the last decade, singers Giacomo Gates and Charenee Wade and beat artist Makaya McCraven ... 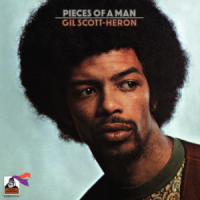 Bob Thiele is best remembered for his years as the artistic director and house producer of Impulse!. He took over from founder producer Creed Taylor in 1961 and stayed with the label until 1969, when he left to run his own Flying Dutchman Records. Thiele's tenure at Impulse! was its most glorious period, when Thiele curated a body of work--daring and ambitious, catching the zeitgeist but also timeless—which has been matched by only a tiny number of other labels.

"All the dreams you show up in are not your own." With those words to an interviewer at The New Yorker, Gil Scott-Heron tried to explain a degree of detachment from I'm New Here (XL Recordings, 2011), his “comeback" and the final studio album before his death that year. The project was initiated by the head of XL and was the first album Scott-Heron released in the sixteen years he struggled with addiction and two drug-related terms in prison. The ...

Live long enough and you'll either be disappointed by your heroes or you'll bury them.Did I say “heroes"? Sorry. I meant to say Gil Scott-Heron wasn't my hero. He was an innovator, a trailblazer, a pioneer and an inspiration, but he wasn't my hero.He was just one of the coolest brothers I ever heard in my life.Without Gil Scott-Heron would rap music ever been born? Probably, but without the social consciousness of a Scott-Heron, ...

Politics has always been just as important to Gil Scott-Heron as his music. Perhaps more so. From the late 1960s into the 90s Scott-Heron preached the message of change; questioning the status quo; sticking up for the oppressed. Therefore Obama's election a few months ago must have seemed like a victory. “Change We Can Believe In" could have easily been a Scott-Heron tune. ...