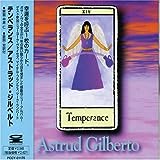 Temperance is not available in the United States, which is a real shame because this is one of Astrud Gilberto's best albums in years.

First of all, the album is worth its price just for the recording of "How High the Moon," which features the New York Voices providing close harmonic support. The other eleven songs on the album were all composed by Astrud Gilberto herself. While her songwriting abilities are not in the same league as her ...

An enchanting new set that is sure to please her longtime fans. Aside from a catastrophic (but thankfully short) sidestep into disco in the mid-70s, Ms. Gilberto has not deviated much from the formula that made her world-famous in the bossa-nova era. Her voice, instantly recognizable from a number of Stan Getz crossover classics, has changed very little and retains most of its original warmth and charm. She composed all but two of the tracks here, and while all the ...