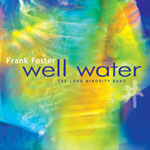 That never happened, and as the months and years went by, it was widely assumed that the master tapes had been irretrievably lost. But Foster's wife, Cecilia, remained ...

Frank Foster's Loud Minority Big Band: We Do It Diff'rent

Frank Foster’s Loud Minority Big Band is more limber than loud -- although it doesn’t shrink from shouting whenever that’s appropriate on this persuasive in-concert album recorded in June ‘02 at NYC’s Jazz Standard, when the seventy-three-year-old Foster was recovering from a stroke that immobilized his left arm and left leg and limited his role to that of emcee.

As one would expect from an old hand who joined the Count Basie Orchestra half a century ago and fronted the ...

This 1966 session lives up to its title, offering the strong, comfortable appeal of a solid Lee Morgan record. Soul Outing was Foster's second Prestige record after concluding an 11-year stint in the Count Basie band in 1964 (the first, Fearless, was also recently issued on CD). Although he'd developed a reputation as an ace arranger, Foster spotlights his own warm, muscular tenor soulfulness here.

He's in a compatible quintet performing three originals and two numbers from the Broadway play ...