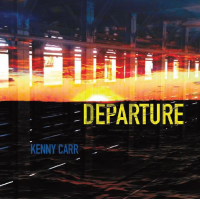 Guitarist Kenny Carr attended Berklee College of Music in Boston. In his final year he got the call to audition for Ray Charles. Carr toured worldwide with Charles for ten years and played lead guitar for Charles' recordings Just Between Us (Sony, 1990) and Live at Montreux (Eagle Rock, 1997). Carr has enjoyed a fruitful career building his own discography of titles as a leader including: Friday at Five (TAS, 2005), Turn the Page (TAS, 2006), Changing Tide ...

I have to confess to being fooled by this recording, the second from guitarist Kenny Carr. It begins in a rather ordinary smooth jazz manner on the first few tracks. Carr, accompanied by bassist Tom Baldwin and drummer Frank Russo, generates a pleasant ambiance with Earl Klugh-type acoustic playing.

Then, with “Cadiz Sunset," the mood shifts to a fingerstyle Caribbean setting which is closer to mainstream jazz. Following that, guest tenor saxophonist Donny McCaslin, who appears on four tracks, instigates ...