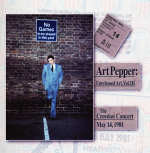 Laurie Pepper, widow of alto saxophonist Art Pepper, has single-handedly made the most significant contribution to her late husband's legacy in the last decade with the release of Unreleased Art, Volume 1: The Complete Abashiri Concert November 22, 1981 and Unreleased Art, Volume 2: The Last Concert May 30, 1982. Both were released in 2007 on her own Widow's Taste label. While superb, these performances were compromised by poor sonics.

Well, not so with Unreleased Art, Vol. III—The Croydon Concert, May 14, 1981. Recorded from the soundboard by a dedicated fan, this recording was presented to Pepper who has now gladly released it. The sound is crisp and potent; particularly Bob Magnusson's mic'd double-bass, which exudes a warm virility, fluidly surrounding the musical micelles of the quartet.

The performances can only be described against the backdrop that Pepper himself presented in his autobiography, Straight Life (Da Capo, 1979), a scene where every performance was an artistically critical battle to prove himself. Pepper throws down the gauntlet, throwing caution to the wind, and plays with an urgency not heard since his Village Vanguard performances in 1977, albeit less torn and frayed.

After his final comeback in the late 1970s, Pepper typically opened his shows with a medium tempo blues and Croydon is no exception. "Blues for Blanche" opens the set, Pepper introducing the piece with a flurry of tart notes that crank start Magnusson into a propelling 4/4 12-bar stroll. White hot is the band's playing, with Pepper and Leviev's brief head leading into the evidence that Pepper was not simply a superb balladeer but also an outstanding bluesman.

If the performance starts off white hot, Pepper turns up the gas achieving a blistering intensity, even on his well-known ballads "Ophelia" and "Patricia." Gordon Jenkins' "Goodbye" has only "Over the Rainbow" as competition as Pepper's standard balladic trademark. Pepper's rhythm section, perhaps the best of his fractured career, stirs the piece into ecstatic frenzy around Pepper's impassioned playing. This is not your parent's Benny Goodman playing "Goodbye" as a confection; this is terrible beauty, corrosively rendered.

Before "Goodbye" is "Cherokee," a song that loomed large in Pepper's psyche as described in Straight Life. Where "Blues for Blanche" is medium tempo, "Cherokee" is taken at a breakneck pace, throwing off sparks. Drummer Carl Burnett kicks things off before Pepper enters, immediately improvising. He plays with the grit and soul that would come to characterize the alto saxophone in the late 1980s and early 1990s. Pianist Milcho Leviev performs a percussive Bud Powell solo while Magnusson keeps perfect time.

The most intriguing and incendiary piece on the recording is the closer, "Make a List (Make a Wish)." Appearing first on Straight Life (Galaxy, 1979), "Make a List" carries on in the vein of "Red Car" from 1975's The Trip (Contemporary/OJC). That is, "Make a List" is a simple progression over which the soloist can explore. And explore they do...for twenty-plus minutes of jazz revelation.